The Asian and Oceanian Association of Neurology (AOAN) was established on the 26th of June 1961, initially with 9 member countries which has since then grown to 20 member countries currently. The main objectives of the AOAN are to promote and foster the advancement, exchange and diffusion of information and ideas relating to the nervous system, as well as encourage scientific research in neurological problems, on an international scale. The Asian and Oceanian Congress of Neurology (AOCN) has been held biennially since 2012. At the 15th AOCN in Kuala Lumpur, with a theme of “Advanced Education in Neurology in the Asian-Oceanian Region”, delegates can look forward to receiving unparalleled and powerful insights of the latest research, developments and treatments in the field of neurology and other important subspecialties including Multiple Sclerosis (MS). This year, the AOCN serves as a platform for the launch of the Malaysian Clinical Practice Guidelines (CPG) on the Management of Multiple Sclerosis, which is also the first CPG on MS in the South-East Asian region.

MS is an immune-mediated, inflammatory demyelinating disease. It affects mainly young women between the ages of 20 and 40 years, and is characterised by recurrent attacks on the nerves of the eyes, brain and spinal cord by cells of the immune system. Most patients have a relapsing-remitting course in which recurrent attacks on the central nervous system lead to temporary dysfunction such as visual problems, weakness in the legs, and bowel and bladder problems, without leaving the patients with much neurological deficits. However over time, these attacks fail to recover completely and the patients are left with increasing disabilities leading to a more progressive type of disease.

In Malaysia, this disease is still quite uncommon compared to other neurological conditions. Based on recent data from the Ministry of Health (MoH), the MS prevalence has increased to 3.23 per 100,000 with females predominantly being affected and all races at risk of the disease. The exact cause is still undergoing much research worldwide but it is hypothesised to be related to a combination of genetic and environmental factors. It is important to diagnose the disease accurately and early while ruling out other diseases that may mimic it such as neuromyelitis optica spectrum disorders (NMOSD).  Early diagnosis and initiation of appropriate treatment has been found to make a difference in the overall outcome of this disease by reducing the number of attacks, and delaying the progression and disability related to it.

Treatment involves managing the acute attacks with steroids and preventive treatments with disease-modifying treatments early in the disease. When treating patients with MS, it is important to use a multidisciplinary approach which incorporates physiotherapy, occupational therapy, psychiatric counselling and intervention as well as rehabilitation to manage the symptomatology of MS. 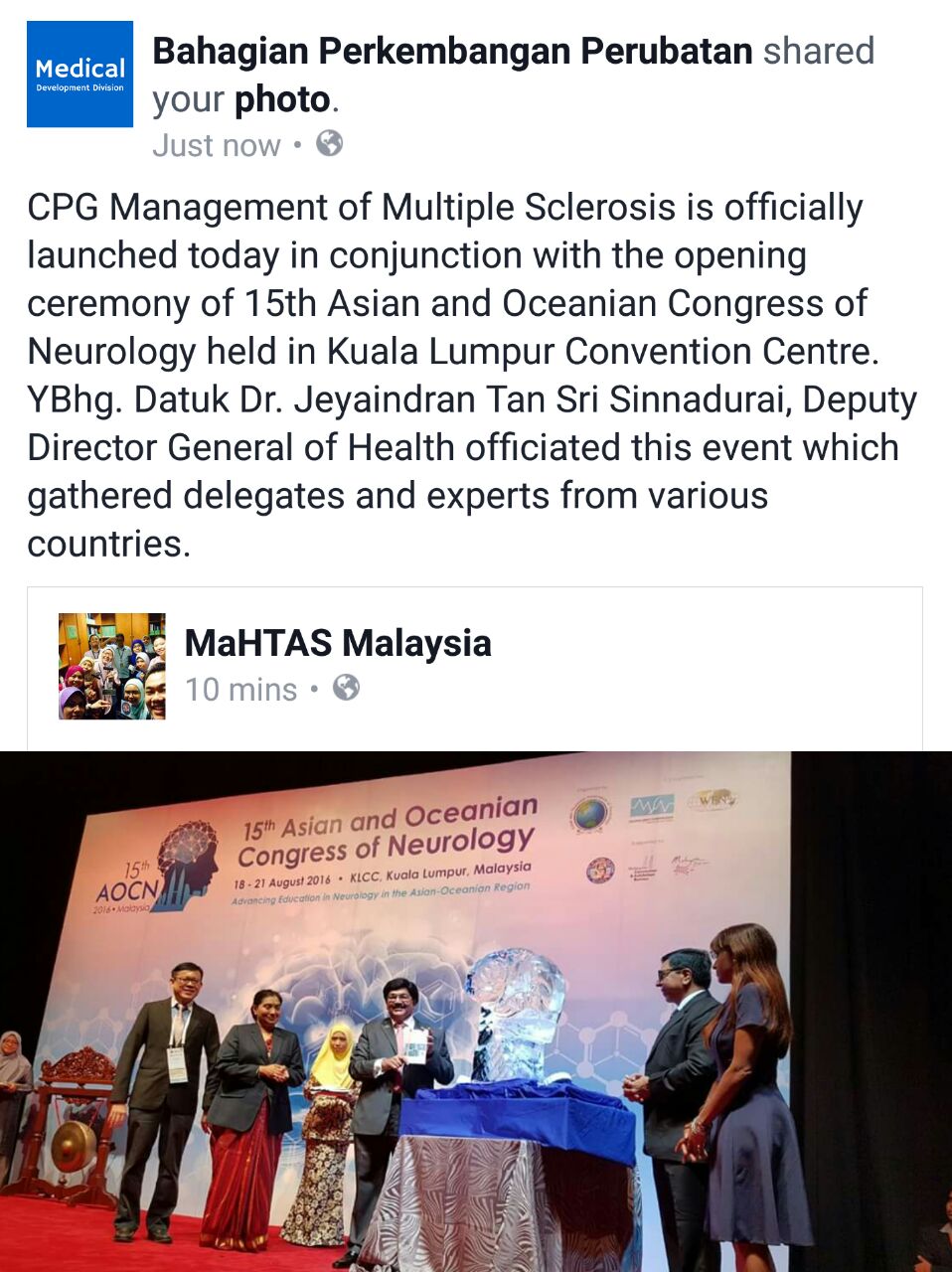 MoH Malaysia is aware of the advances in diagnostic methods and new treatment modalities available for MS. The development of the first edition of the CPG on the Management of MS is in line with the ministry’s efforts to improve early and accurate diagnosis and the management of this disease. The evidence-based CPG has been developed by a multidisciplinary team from MoH, Ministry of Higher Education, the Malaysian Society of Neurosciences and the private healthcare sector. These guidelines provide recommendations on the diagnosis of MS, its diagnostic tools and treatment options available currently in the country. Implementation strategies such as a quick reference and training modules have also been developed to improve the utilisation of the CPG.