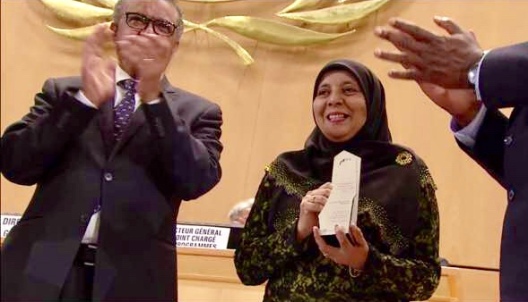 The World Health Organisation (WHO), Geneva, Switzerland today announced the award of the Dr LEE Jong-wook Memorial Prize for Public Health, to the research team comprising of Dr. Nazni Wasi Ahmad, Dr Lee Han Lim, Ms Teh Chien Huey, and Ms Suhana Othman of the Medical Entomology Unit, Institute for Medical Research, Kuala Lumpur and Dr Harikrishna K. Ragavan of Wound Care Unit, Kuala Lumpur Hospital. The award was presented by the President of the Seventy-first World Health Assembly (WHA) during a plenary meeting at the Palais des Nations, Geneva. It is a great honour and pleasure for the biomedical researchers from the Institute for Medical Research to have received the conferment of such a superlative award for unprecedented scientific achievement in Malaysia.

The Dr LEE Jong-wook Memorial Prize for Public Health was established in 2008 and aims at rewarding work that has extended far beyond the call of normal duties and to those who have made an outstanding and significant contribution to public health. It is among the prestigious awards and foundations established under the framework of the WHO. Overall, twelve candidatures were received by the Dr LEE Jong-wook Memorial Prize Selection Panel in 2018.

From among the 12 nominations in 2018, the Dr LEE Jong-wook Memorial Prize for Public Health is honourably conferred to lead researcher Dr Nazni Wasi Ahmad, from the Institute for Medical Research, Malaysia, for her exemplary contributions in Maggot Debridement Therapy (MDT). The MDT is a type of biotherapy involving the intentional application of live, sterile fly larvae or maggots into the non-healing wound of a human or animal to debride the necrotic wound, reduce bacterial contamination of the wound and stimulate healing. It is a safe, effective and affordable alternative treatment that is available at any time and in any healthcare setting, mainly primary healthcare facilities, to treat diabetic foot ulcers.

Since 2003, the research team has developed and patented methods of sterilising the maggots of a local strain of the blow fly Lucilia cuprina and successfully demonstrated the effectiveness of using these sterile maggots to debride intractable diabetic and other wounds, without any untoward and undesirable side effects. The rate of limb amputation in these patients was also substantially reduced. The research received support through the research grant from the Intensification of Research in Priority Areas (IRPA) programme (2002-2004) and the Major Research Grant from the Ministry of Health (MRG-MOH) from 2006 to 2008. Subsequently, the Institute for Medical Research envisioned the commercialisation potential of MDT and hence further secured a grant from the Malaysian Technology Development Cooperation (MTDC) for small-scale deployment of MDT to patients in the hospitals. Today, MDT is currently practised in health clinics in most districts in Malaysia, including those hard-to-reach areas in Sabah and Sarawak thus making the MDT accessible and affordable to the people, especially for the socially and geographically disadvantaged population groups. These activities are in line with two of the critical elements of achieving the ultimate goal of primary healthcare by the WHO, namely, reducing exclusion and social disparities in health and organising health services around people’s needs and expectations.

The Ministry of Health would like to take this opportunity to congratulate the research team for their exemplary performance and outstanding achievement in the development and deployment of this innovative debridement that has benefited many patients.

Tagged as: Maggots, WHA, WHO